A Sacramento woman fired from the California Commission on Teacher Credentialing after disclosing a three-year backlog in teacher misconduct complaints has won a $3.1 million jury verdict in a lawsuit against the agency and two of its executives.
Whistleblower Kathleen Carroll, an attorney for the commission until her termination in November 2010, revealed sweeping backlogs, nepotism in the agency and favoritism that within a year led to a blistering state audit of its educator discipline process. Then-state Auditor Elaine Howle characterized the commission as one of the “worst-run” agencies she had ever investigated.

Carroll said she wept after the jury verdict. “This has been six years of my life,” she said this week. “As the jurors were walking out, some of them had tears in their eyes and came to me and hugged me. It was very emotional. I think they put themselves in my position. They seemed very compassionate about what I went through.” Sacramento Superior Court jurors issued their verdict Aug. 10 following a 20-day trial and after little more than six hours of deliberations, said Dan Siegel, Carroll’s attorney in Oakland. The whistleblower retaliation suit named the commission along with former general counsel Mary Armstrong, who headed the division that oversaw teacher sanctions, and assistant chief counsel Lee Pope. Both have since retired.

The commission issued a statement expressing, in part, disappointment with the outcome. Neither Armstrong nor Pope responded to Sacramento Bee requests for comment. In 2012, Carroll lost her appeal to the State Personnel Board for reinstatement, failing to prove
she was dismissed because of whistleblowing. But Superior Court jurors this month did find that Carroll’s whistleblowing contributed to the commission’s decision to fire her. Jurors held the commission liable for the bulk of the $3.1 million in damages. The award included punitive damages against Pope of $130,000 and against Armstrong of $90,000. The law does not allow punitive damages against public agencies.

Carroll said the years of court battles have been emotionally and financially draining. As a heart transplant recipient, she deals with high medical bills and has spent all her personal and retirement savings. She has not been able to buy tickets to visit her mother in Connecticut, who is 87 and in ill health. “There were many times I felt like I have got to see my mom and this is not worth it,” she said. She said her mother cannot understand why Carroll has not to come to visit. “I could have just looked the other way,” Carroll said. “But I wouldn’t have been able to live with myself. These were not little offenses; they were serious.”

Siegel said that while many complaints against school employees with credentials are routine, others can involve child molestation, child pornography or drug addiction. “What Kathy learned was there was a huge backlog of work” of all sorts that wasn’t being processed, he said. During the years required for the commission to act, teachers could leave one school district and get a job in another.

Carroll said some cases would have resulted in mandatory license revocations because of court convictions.“They are automatically revoked,” she said, “and that was not happening. That was one of the things that pushed me. “There were stacks of paper everywhere. Some were in desks and some in boxes. They hadn’t been entered into the computers. Student assistants were finding those serious convictions in some of those stacks.” The day of that discovery, she said, “my heart dropped.” One case left unaddressed for three years involved a middle school teacher arrested for allegedly showing pornography to a student, she said. When the commission finally pursued it, they could no longer find witnesses.

“That person is still teaching today,” she said. When she sounded the backlog alarm with colleagues, she said, “I was shunned like I was
radioactive.” Then, according to the lawsuit, Armstrong told commissioners at a public meeting in August 2009 there were only little backlogs from time to time. Siegel said when Carroll raised the issue, executives at the commission “basically blew her off.”

In mid December 2009, Carroll turned to the Bureau of State Audits’ whistleblower hotline and later spoke to a member of then-Senate President Pro Tem Darrell Steinberg’s staff. “They did their due diligence and concluded she knew what she was talking about,” he said. Steinberg requested the audit, which began in mid-2010.

Siegel described Carroll as an admirable character who “went out on a limb” for what she believed. He said that in the months leading up to Carroll’s firing in November 2010, some of the commission’s executive leadership “began plotting to see how they could get rid of her.” They tried to lay her off, proposing her elimination as a cost-cutting measure tied to just one employee, according to the suit. Ultimately, the commission fired her outright.

The audit found major flaws in nearly every aspect of the commission regulatory process, including lapses in launching investigations, gathering facts, tracking cases and revoking or suspending teacher credentials for misconduct. The backlog reached 12,600 cases at one point. Surveys tied to the audit showed that 40 percent of employees said hiring and promotion at the agency were compromised by family relationships or favoritism. And 43 percent of respondents at the commission said they feared retaliation if they filed a grievance or formal complaints.

At a Joint Legislative Audit Committee hearing in May 2011, then-Assemblyman Ricardo Lara, a Bell Gardens Democrat, said he wanted to see a shake-up of the commission’s 15-member governing board and called for resignations at the head of the agency. “Somebody needs to be held accountable for the gross mismanagement of the commission,” said Lara, who chaired the committee and is now a state senator. The next month, Executive Director Dale Janssen said he would retire.

The commission this week signaled that it could appeal. “The Commission will carefully consider all legal options before deciding how to move forward,” the agency statement said. “The events surrounding this case occurred nearly seven years ago under far different circumstances. The commission has undergone a complete transformation in serving the needs of California’s students and teachers.”
The commission meets Sept. 8-9 and is expected to consider in closed session whether to recommend an appeal of damages, said spokesman Joshua Speaks. Commissioners could also consider whether to recommend that the state pay the punitive damages jurors found against Armstrong and Pope. Asked what’s next for her, Carroll said, “My priority is to see my mom.” 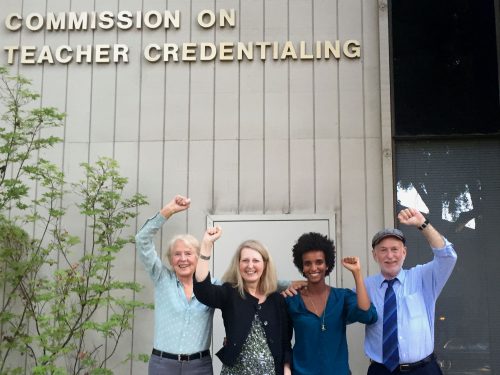