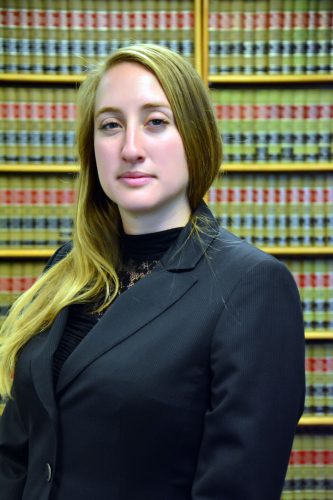 Associate attorney EmilyRose Johns fights tirelessly for her clients. She has amassed numerous victories in the areas of prisoners’ rights, police misconduct, discrimination in employment, education, athletic opportunities, and criminal defense.  She is admitted to practice in the Northern and Eastern Districts of California and divides her time between federal and state courts.

EmilyRose is an active member of the National Lawyers Guild and serves on several local committees, including the demonstrations committee and the NextGen committee.  She also serves on the legal committee of the Anti Police-Terror Project.

During law school, EmilyRose interned at the D.C. Prisoners’ Project and the Public Defender Service of the District of Columbia. She volunteered with the Marshall Brennan Constitutional Literacy Project, teaching constitutional law to high school students in the Anacostia neighborhood in D.C. She received the 2013 Peter M. Cicchino Award for Outstanding Advocacy in the Public Interest.

EmilyRose volunteers with Berkeley’s Needle Exchange and Emergency Distribution and plays soccer in several Bay Area leagues. Prior to joining  Siegel, Yee & Brunner, she worked as a Fellow at the Prison Law Office in Berkeley.