Alan S. Yee has over 40 years of experience specializing in civil litigation. He has extensive experience in the area of personal injury, including wrongful death cases. His cases involve claims resulting from auto accidents, slip and falls and other claims by people who have suffered an injury or death due to the negligence of others. 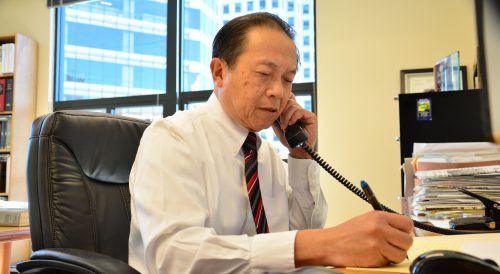 His cases include the wrongful death claim of relatives in the crash of Alaska Airlines flight 261 off the coast of California in 2000.

He also maintains an active practice in probate litigation and estate planning, including wills and trusts. He continues to represent businesses and individuals in general litigation across a broad spectrum of areas.

Mr. Yee received his B.A. in 1974 from Princeton University and his J.D. in 1978 from the University of California’s Berkeley School of Law in Berkeley.
Mr. Yee has a tradition and commitment to involvement in community affairs and public service. He was elected as a trustee of the Peralta Community Colleges and served as its president in the early 1990’s. He was appointed to the City of Oakland’s Police Review Commission and served as its chair. Mr. Yee has also served as a pro bono attorney representing the elderly and poor in many local community issues. In recognition of his achievements, Mr. Yee received the 2004 President’s Pro Bono Services award from the State Bar of California. He served as a Commissioner for the Port of Oakland from 2009 to 2018.