Anne Butterfield Weills has been a civil rights and equity activist since her teenage years.  She was one of the first organizers of the women’s liberation movement in the San Francisco Bay Area.  Prior to becoming an attorney Weills worked as a union organizer for the International Longshoreman and Warehouse Union (ILWU) and the International Garment Workers Union (IGWU).  Weills also taught women’s studies at Antioch College’s San Francisco campus until she was fired for helping students organize their strike against excessive student fees and inadequate standards of instruction. 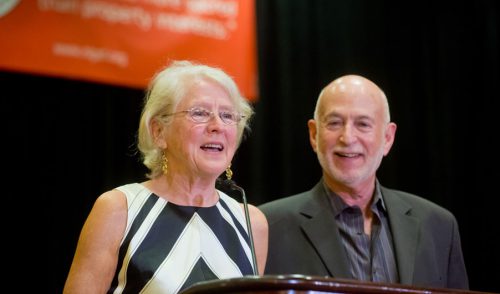 Weills worked for Caterpillar Tractor in San Leandro from 1977 to 1982 as a machinist, was a union activist and an Executive Board member of the International Association of Machinists (IAM), Local 284.  After Caterpillar closed its San Leandro plant, Weills went to law school and received her law degree from the Golden Gate University Law School in San Francisco in 1988.  After graduating from law school, she has specialized in employment discrimination law, especially in academia, presenting both faculty and students.  Most recently, Weills has been involved in prisoner rights representation and litigation.

Weills’ first case out of law school was Jenny Harrison’s suit against The Regents of the University of California for sex discrimination in the denial of tenure in the U. C. Berkeley Mathematics Department. This case resulted in a University settlement, which led to Dr. Harrison’s appointment as a tenured full professor, and a substantial financial settlement.  On March 1, 2000, the jury in the case of Colleen Crangle v. Stanford University returned a verdict of $545,000 for Dr. Crangle. Dan Siegel and Weills represented Dr. Crangle, a brilliant Stanford research scientist, who sued for gender bias and retaliation. The verdict, later increased to over $1 million, when the trial judge awarded attorney’s fees and costs to Dr. Crangle, was the first trial loss ever for Stanford in a civil rights case.

In June 2003, Weills and her co-counsel, Siegel, won at trial against Brown University, (Providence, R. I.) in a tenure denial case of an electrical engineering professor, Fred Shoucair, who is of Lebanese descent.  Dr. Shoucair was subject to discrimination at Brown because of his ethnic heritage, one manifestation of this was being told that he “looked like a terrorist,” by the Dean of Engineering who orchestrated his tenure denial.  The judge ordered that Shoucair be paid $555,000, including $100,00 for punitive damages and attorneys fees were awarded separately.

Currently, Weills is co-counsel in a class action lawsuit led by the Center for Constitutional Rights (CCR) against the California Department of Corrections and Rehabilitation (Ashker v. Brown, et al. (Case No. C 09-05796 CW). The suit challenged solitary confinement and indefinite detention in the Pelican Bay State Prison Security Housing Unit (SHU) and lack of due process regarding prisoners being assigned to SHU. The Ashker suit was settled in September 2015 resulting in the release of approximately 2000 men from CDCR’s Security Housing Units who had been isolated from human contact for decades. Weills grew up in the Bay Area and has lived in Oakland for almost 40 years. She is married, has two sons and three grandsons.